A Look Back: MAC Summer Show

Did you know that Muskoka Arts & Crafts’ Summer Show started with a question? 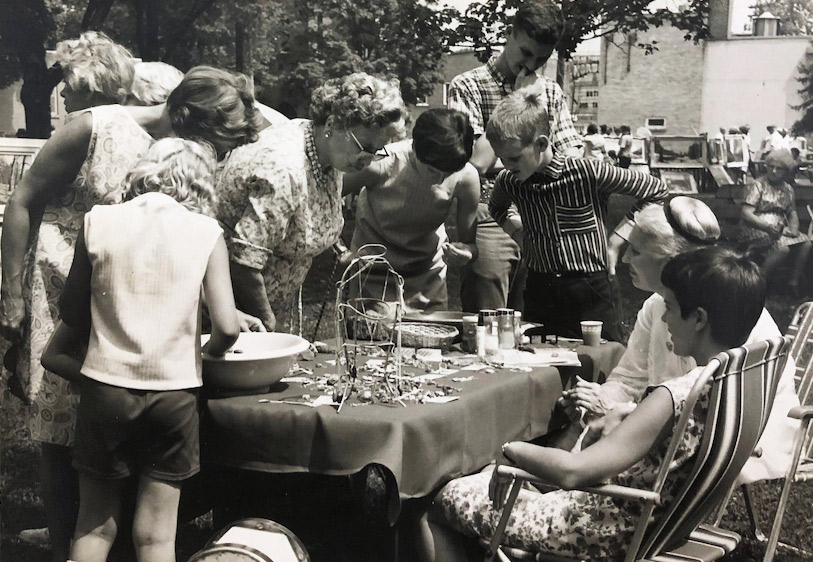 Formed in 1963, Muskoka Arts & Crafts has a long, vibrant and interesting history that we’re proud to share with you through our regular blog series called “A Look Back”.

Did you know that Muskoka Arts & Crafts’ Summer Show started with a question? Betty Reid, the Bracebridge librarian, posed it in her newspaper column Library Corner on May 23, 1963:

“What would you think of having an arts and crafts sale during the summer when visitors are looking for something to take home to remind them of their holiday? Properly organized, this could develop into an annual highlight of the summer season.”

No one responded, but Marge Donaldson decided to hold a meeting at her home to develop the plans for a summer show. A committee was formed, comprised of Mrs. Douglas Howie, Mrs. Audrey Hammell and Mrs. Margo Paterson, and the seeds for Muskoka Arts & Crafts were sown.

The first show was set for August 16 and 17, 1963 at Memorial Park in downtown Bracebridge. The entry fee was one dollar and artists were invited to enter their work. Two weeks before the show was to open, the organizers had received only one application. Discouraged, the committee continued their work and the entries began to arrive. An estimated 3,000 people attended the show to view the work of 50 artists. The show was considered a tourism, cultural and financial success. Ten years later, when the Summer Show outgrew Memorial Park, it relocated to Annie Williams Memorial Park in Bracebridge where it remains to this day.

This year, due to COVID-19, Muskoka Arts & Crafts had to cancel its 58th Annual Summer Show that was to take place July 17 to 19. In making this decision, Muskoka Arts & Crafts’ first and foremost priority was for the safety and health of its artists, volunteers, customers, service providers, staff and community.

At Muskoka Arts & Crafts, we were heartbroken that the Summer Show had to be cancelled as we know that this event is an important part of artists’ livelihood. We were saddened to disappoint the customers who look forward to attending this long-running summer tradition in Muskoka and supporting artists through their purchases. We were also acutely aware of the impact that the loss of such a significant event, both for tourism and our economy, would have on our community and its businesses. But, we felt in order to keep everyone safe, we had to make this difficult decision.

Since our guests weren’t able to attend the Summer Show this year, we moved the show online. MAC’s Facebook page featured all of the Summer Show artists, with each post including information about the exhibitor and their work as well as contact information for purchases.

The whole team here at Muskoka Arts & Crafts looks forward to the return of the Summer Show in 2021!