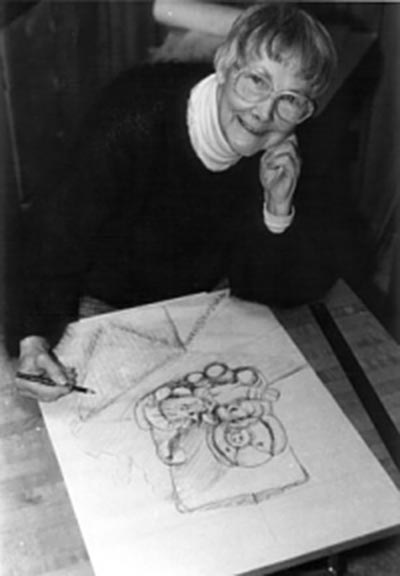 Jean W.A. Forder was born in Skipton-in-Craven, Yorkshire, England on July 28, 1918. During the Second World War, Jean was employed as a dispatcher for the London Fire Brigade. Some time after the war, Jean trained in social service work, specializing in gerontology.

In 1961, Jean emigrated to Canada, enthusiastic for an adventure that freed her from the restrictions and predictability of life in England. During the 1960s, Jean continued her career in social work in The Pas, Manitoba. Then, in the 1970s, Jean made her life in Muskoka, living in Port Carling.

Retirement for Jean meant beginning an active career by developing her artistic talent and zestfully contributing to the art community in Muskoka. She took classes in her first love—watercolour—and expanded her interest in other media as well. She won a number of ribbons at the Bracebridge Fall Fair and several awards from Muskoka Arts & Crafts for her work. In 1985, Jean began the Brown Baggers, a group of artists dedicated to developing their talents, encouraging each other and setting artistic goals for themselves each year.

Jean’s talents were many—encouraging, networking, mentoring—and she attracted many, many friends to her with her ability to accept and find the positive in all.