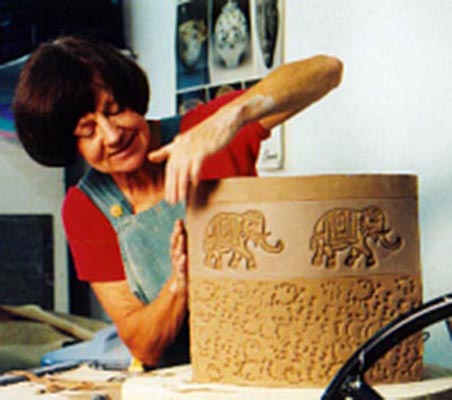 In the late 1970s, Mieke Martin Soontiens began her journey into clay at Georgian College under the tutelage of Eric Lindgren.

Over the years, her gallery, Pine Lake Gallery, has played host to many group shows, which helped to encourage and promote other local talents. Her Saturday morning children’s classes inspired her students to explore and share in the joy found in the endless possibilities of clay.

Mieke has been a long-time member of the Muskoka Autumn Studio Tour and has supported it as an opportunity to educate the art and craft consumer.

During the years of Jean MacDonald’s presidency, Mieke served on the Executive of Muskoka Arts & Crafts as the 2nd Vice-President and served on a number of our jury panels. Her culinary talents are legendary, and each year she single handedly prepared and served a luncheon to the Spring Show judges and organizers.

In March of 1998, Mieke and her husband, David, moved to Nova Scotia.