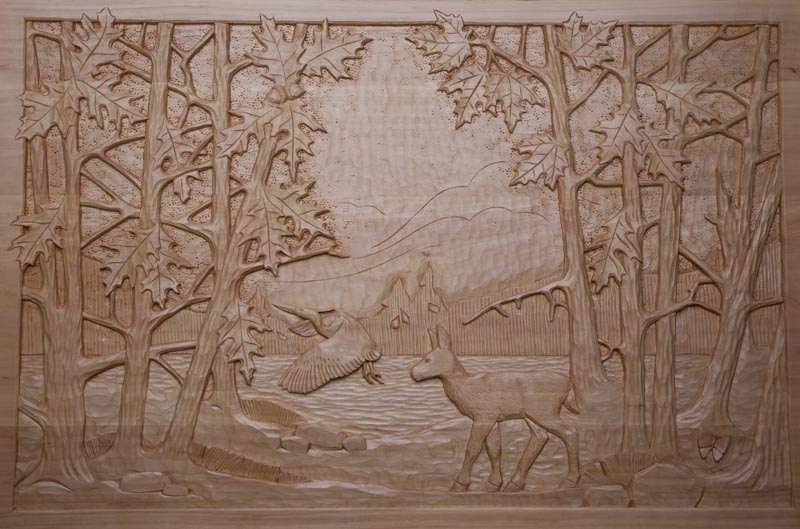 Jim Drury was born in Sudbury, Ontario and has had a lifelong interest in wood-carving, nature, drawing and photography. In 1958, he married his wife, Donna, and together they raised two children.

Jim had an 18-year career in the Royal Canadian Air Force and, during those years, he spent his off-duty time carving crests for offices and individuals in Canada and other countries. He left the services to teach woodcarving at the Catherine Whyte Multi-Cultural Center in Cold Lake Alberta and in the summer of 1975, received a grant from the Alberta Government to travel overseas and research woodcarving. Jim also taught woodcarving courses at The Alberta Vocational College, as well as seminars in parks and evening classes through Northwest Community College. When the Center closed, the Drurys moved to the Queen Charlotte Islands where, for five years, Jim fished halibut but continued his carving. In 1983, the Drurys came to Muskoka.

They were enthusiastic, active members of Muskoka Arts & Crafts and participated in many shows. Jim was  awarded the Patricia Boyer award at the 1996 Spring Members’ Show, an Excellence in Woodcarving in 1992, and many honourable mentions. During his twenty years in Muskoka, Jim accepted commissions for wood-carving in homes and cottages throughout Canada and the United States. Among these were the doors and chapel furniture for St. Margaret’s Church in Midland, a large puzzle map of Canada for Glaxo Smith and Kline in Mississauga and carvings in the round produced as award presentations for the Tourism Industry Association of Canada. The creator of the well-known comic strip “For better or For Worse” commissioned two carved doors.

Jim has always credited Donna as a full partner in his artistic endeavours. In fact, he asserts that his role—doing the drawing and carving—is by far the easy part. He maintained that Donna’s contribution, that included not only finishing the pieces, but also preparing for the shows, keeping the accounts, providing constructive criticism,was a more than equal share. Jim  resides in Sidney, on Vancouver Island.

In 2004, Jim and Donna were made lifetime members.