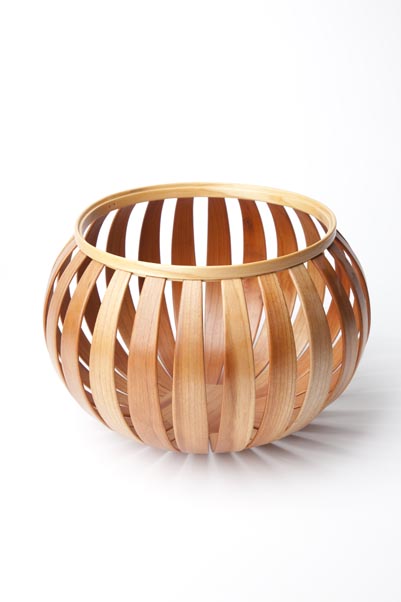 Peter Taylor’s father owned a sawmill in Haliburton County where he and his friends spent many hours building things with the countless wood scraps lying about, sowing the seeds for his life-long relationship with wood. In his early 20s, while living in Toronto with his now wife Lynn, Peter bought pieces of furniture from old junk shops, repaired and refinished them as well as building new pieces to furnish their small home. At one point, the couple had six rocking chairs. For a number of years, Peter worked with a master carpenter from New England and learned the art of classic construction and fine woodworking.

Over the years, Peter and Lynn owned two century homes and fully renovated them while Peter continued to perfect his woodworking skills in his workshop. One day, a woodworker friend who did the craft show circuit mentioned to Peter that no one was bending wood, so he began to experiment and taught himself the process through trial and error. He began with replicating Shaker boxes and baskets, then went on to try out his own designs.

At one point, Peter and Lynn shared a house with Masatada Funo, a self-taught raku potter and long-time resident of Vancouver, British Columbia, who is known for his distinctive boxes and sculptures. The Taylors acquired a number of his pieces, one of which was a reject off-kilter round vessel that became the inspiration for Peter’s Funo Basket, the one selected for the Permanent Collection of Muskoka Arts & Crafts.

Shortly after moving to Bracebridge in 1986 and joining Muskoka Arts & Crafts, Peter entered his first Spring Members’ Show and was astounded to have his piece awarded Best in Show and then bought by one of the judges. A few years later, he was equally astounded to have his Funo Basket also win at the Spring Members’ Show and be selected for Muskoka Arts & Crafts’ Permanent Collection.