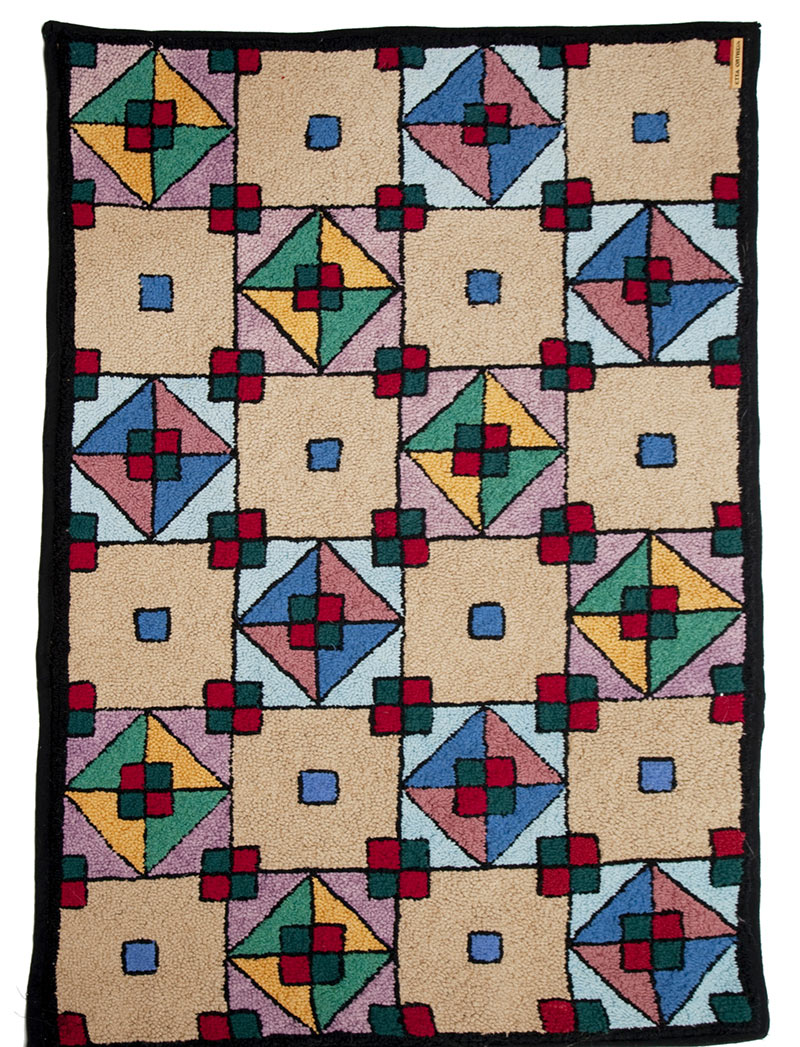 Etta Ortwein did much to ensure that the tradition of rug hooking was not forgotten. Her talent is preserved in the pieces themselves and in the wisdom and skills she passed on to others.

Hooking rugs had been on the periphery of Etta’s experience since childhood but it was not until her own children had grown up and left home that rug hooking became such a pervasive force in her life. The turning point for Etta was the discovery of a cloth-cutting machine at a demonstration she attended in the late 1950s. “My mother could hook rugs, “but it was a crude way of hooking back then,” Etta explained. “We used my father’s old underwear and old clothes that my mother washed and coloured in dye. We had to cut the material into thin strips with scissors. You can imagine how much time it took.”

Etta virtually stopped hooking rugs when she left her childhood home near Harmony Corners, just outside of Gravenhurst. The decades that followed were filled with work on the farm and raising her children. In 1945, she and her husband moved into Gravenhurst where she became actively involved with the Women’s Institute, the Silver Moon Rebecca Lodge and the Horticultural Society. When she learned that there were weekend classes held at a farm in Vineland, Etta began attending them regularly. From these beginnings, the Ontario Hooking Craft Guild was formed and Etta was a member of the Guild when it began in the 1960s. Having decided to make rug hooking a full-time occupation, Etta joined the newly formed Muskoka Arts & Crafts in 1963 that had about thirty members at that time.

Etta’s concession to her octogenarian years was to switch from teaching rug hooking courses in the schools to giving private lessons in her home on a one-to-one basis. “There’s so much you can do with rug hooking skills,” Etta once remarked. “It’s not just making rugs. With sculpturing and shading techniques, you can create three-dimensional pictures of flowers and birds. There’s so much scope for creativity.”

Her rug that was selected for the Permanent Collection originated from a design Etta saw in her travels. Working from memory and adding elements of her own, she created the triangular patterns with country-kitchen colours.