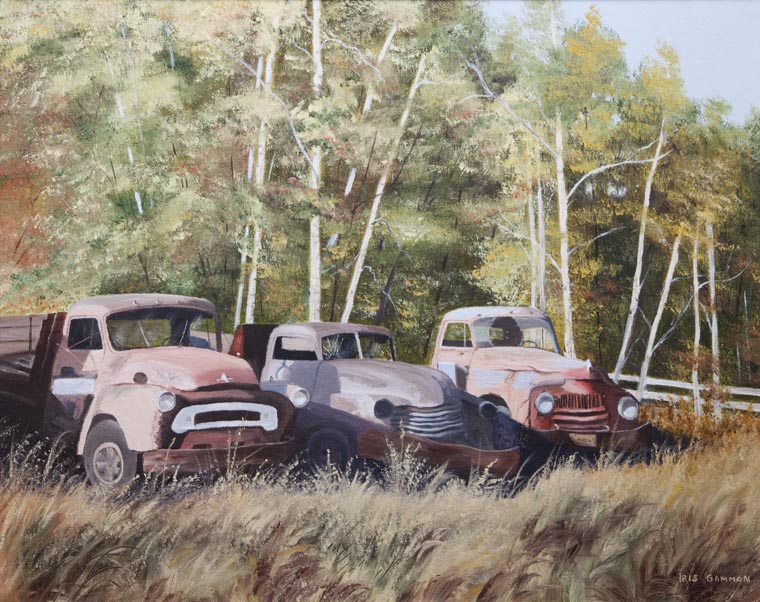 Iris Gammon was born in Parry Sound and has lived all of her life in Muskoka. Her love of the landscape surrounding her MacTier family home began early in her childhood and has remained a life-long infatuation. A gift of oil paints on her sixteenth birthday gave Iris her first opportunity to capture what she saw on canvas. It was the beginning of an artistic relationship with a landscape that, for Iris, would never lose its allure. In the years that followed, as she raised seven children and pursued a teaching career, Iris put her artistic leanings on the back burner. But she kept them simmering, waiting for the time when she could continue her creative journey.

In the early 1980s, Iris took up that artistic journey in earnest, painting the craggy shores, windswept pines and weathered barns of her beloved Muskoka. Largely self-taught, Iris nonetheless learned what she could. She visited galleries, read art books and enrolled in workshops. In 1982, at one of those workshops, Iris met fellow painter, the late Jean Forder, who suggested they venture out-doors together to paint. Soon others joined the intrepid group that became known as the Brown Baggers – so named for the paper-bagged lunches they carried on their weekly en plein air excursions.

Over the years, Iris’s has developed her technique and honed her painting skills, but she declares she will forever be learning. Nevertheless, she is very proud of the Crystal Palette Award she earned for Best of Show at the Chapel Gallery’s Annual Brown Baggers exhibit. In the days since her childhood, Iris has traveled and seen the world, but today, as always, she remains enamoured with the rugged landscape in which she was born and raised.