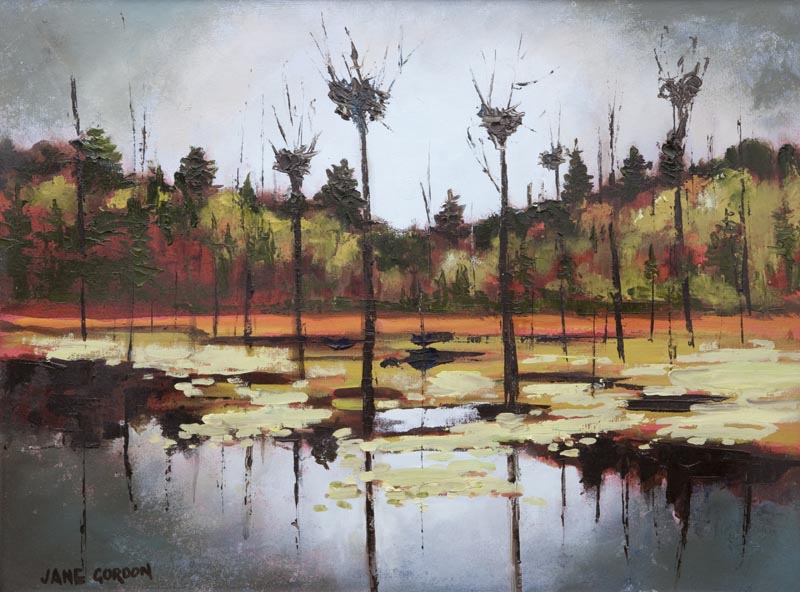 The Herons Have Gone

Jane Gordon was born and raised in Toronto, but moved to Muskoka in the early 1970s. As a child, she was introduced to its pine-filled vistas, rocky outcroppings and many lakes when her family built a log cabin on Skeleton Lake. In the years since, she remained captivated not only by the rocks, pines and sunsets, but also by the quiet solitude of Muskoka’s wetlands. Where others see only rotting stumps and reed-clogged stagnant waters, Jane discovered visual treasures.

Throughout her painting career, Jane found Muskoka compelling, asserting that it remained the place she wanted to be and the subject she wanted to paint. She continued to paint it throughout a busy life that included raising five children. A member of the Brown Baggers since its inception, Jane would begin her paintings on site. Later, she completed them in the studio of her Bracebridge home which was surrounded by gardens and overlooked the Muskoka River.

Jane’s paintings are as richly textured and vibrantly opulent as the scenes she loved to depict. Preferring to work on board with a palette knife, her expressive technique captured the ruggedness of the Muskokan terrain. Although her work has earned her awards at Muskoka Arts & Crafts’ Spring Members’ Show, Jane’s true reward came from the sheer joy of sharing her lifelong love of Muskoka.